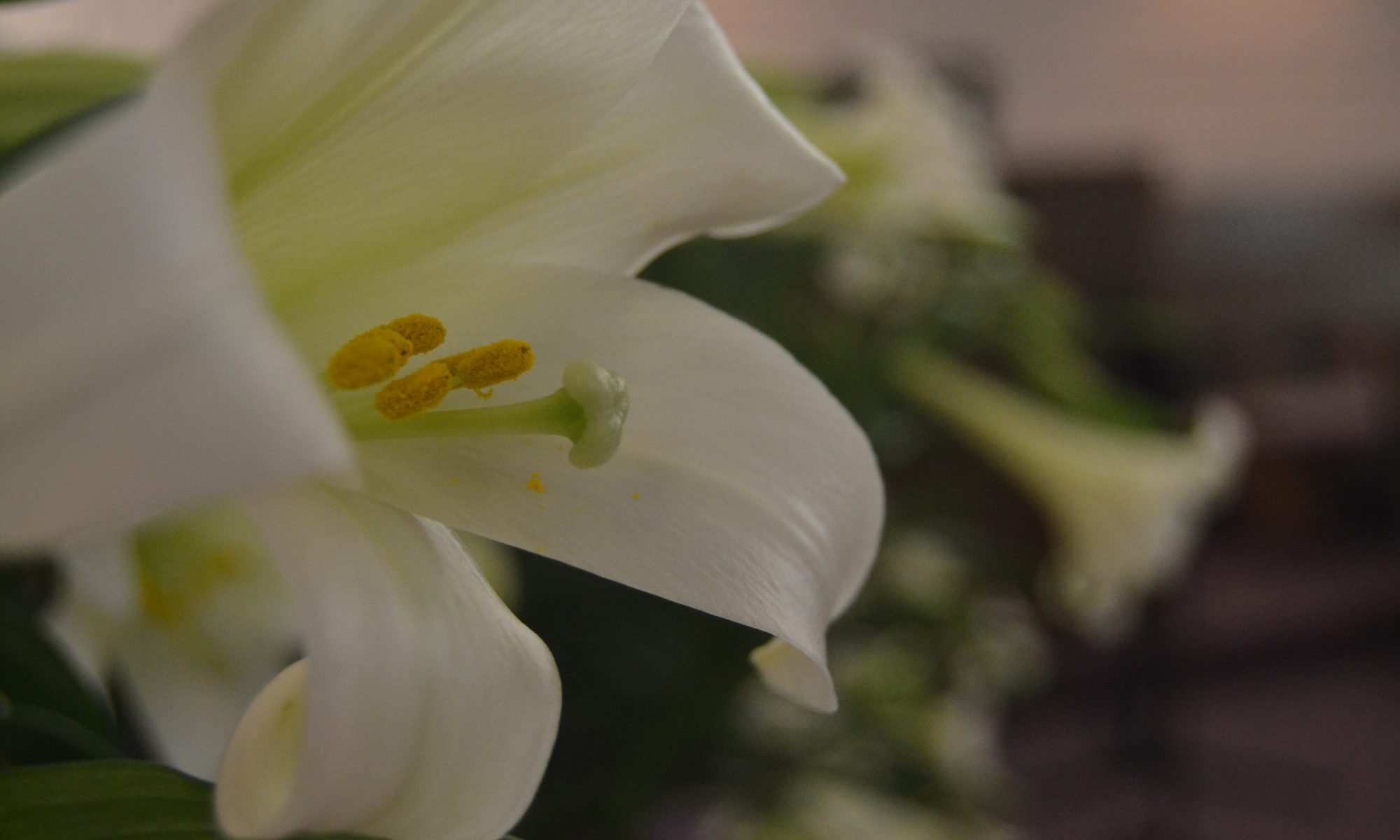 EASTER is an occasion for us to come together as a Christian family to celebrate the resurrection of our Lord. But it is also a good time to revisit a church, to reconnect with our own families and to recommit to our spiritual journey. It is always a joy to welcome new people and family into our community this day and as always I invite you return to visit us again.

One of my favorite EASTER services was early in my ministry. It was my first church as a senior pastor and It was my first Easter in this church… and I was nervous.. EASTER is kind of a big deal and I was feeling the pressure. So, in my anxiety, I became overly organized. Every detail was covered, each I was dotted and each t was crossed… or so I thought.

The sunrise service started promptly at 7am, so I was at the church by 6, setting up chairs in the garden, placing a hymnal and a bulletin on each chair, decorating the garden with lilies.  When others arrive, I instructed the ushers on what to do and checked in with the pianist.. then at 659, I lined up to process… unfortunately I forgot one thing: you see, the sprinklers were on a timer… so as the clock struck 7, I started to walk as the pianist played the hymn and the sprinklers showered the crowd!

People jumped up from their chairs, bulletins and hymnals flying. It was as if a voice came from heaven “On your feet! Rise up”

For me it is a perfect metaphor for EASTER morning: sometimes we need a Shock to get us moving! A shake to wake us up! A surprise to make sure we are ready for what is to come!

So often we celebrate EASTER as a memorial to an event long ago. It is that, but it also speaks to us today! It tells us to get up! To wake up! To get on our feet at get moving!

So first, let us examine the events from our Scripture:

An interesting note for those who are looking for female role-models in the bible, in each account of the resurrection, it is a woman or a group of women who first encounter this miraculous event:

And here in John, the witnesses are down to one:

1Early on the first day of the week, while it was still dark, Mary Magdalene came to the tomb and saw that the stone had been removed from the tomb.

There was a tradition in Palestine that soul hovers around the body for three days after death, therefore it was the custom to visit the tomb of a loved one during this time. In this way, one could mourn and feel close to the person who was physically gone. But one of those three days was the Sabbath, so at the first possible chance – in the early hours of the next morning Mary went to the tomb.

And she noticed the stone was rolled away … This was not some small stone, not some easy task. And, as the gospel of Matthew details, those who put Jesus to death made certain arrangements to ensure the security of the tomb.

In the gospel of Matthew (27:62-66:) Instructions are given to ensure the security of the tomb.

62 The next day, [ after the death of Jesus] … the chief priests and the Pharisees went to Pilate. 63 “Sir,” they said, “we remember that while he was still alive that deceiver said, ‘After three days I will rise again. ‘ 64 So give the order for the tomb to be made secure until the third day. Otherwise, his disciples may come and steal the body and tell the people that he has been raised from the dead. This last deception will be worse than the first.” 65 “Take a guard,” Pilate answered. “Go, make the tomb as secure as you know how. ” 66 So they went and made the tomb secure by putting a seal on the stone and posting the guard.

So the tomb should have been secure: it was sealed; there was a guard … but when Mary arrived, the guards were gone and the large entrance stone was displaced. And Mary, faced with the empty tomb, ran to tell the others.

2So she ran and went to Simon Peter and the other disciple, the one whom Jesus loved, and said to them, ‘They have taken the Lord out of the tomb, and we do not know where they have laid him.’

So Mary wonders: Have they taken the body to inflict even more terrors on Him? They have beaten him, cut him, humiliated and crucified him.. what more will they do? She wonders to the others.

Upon hearing Mary’s words, Peter and the other disciple started running for the tomb. Both were running, but the other disciple outran Peter and reached the tomb first. When they reached the tomb, the Beloved disciple stood at the entrance and looked in, but Peter impetuously stepped into the tomb – and he saw the graveclothes – and He wondered, “Why would robbers take the body but leave the clothes?” But they were not disheveled; they were folded neatly, perfectly, as if they’d never been worn. The Beloved disciple went into the tomb, saw and we are told he believed. Then the disciples went back to their homes, but Mary stood outside the tomb crying.

As she wept, she bent over to look into the tomb and saw two angels in white, seated where Jesus’ body had been, one at the head and the other at the foot. They asked her, “Woman, why are you crying?” “They have taken my Lord away,” she said, “and I don’t know where they have put him.”

Mary came to the tomb to mourn and that she did, but this weeping transformed into something else. In John16:20, before the events that would lead to his death, Jesus tried to explain what was to come to the disciples and he said to them: “Very truly I tell you, you will weep and mourn while the world rejoices. You will grieve, but your grief will turn to joy.”

And just as she is grieving the loss of her friend, her teacher, her Lord, Jesus appears to her:

And then she wept with joy. Overcome with the sight of her beloved teacher and friend, overcome at his acknowledgement of her, overwhelmed at the possibility of new life, she wept with the knowledge that his life, his influence, his ministry was not finished.

As author Fred Craddock explains “…even for disciples like Mary, Easter does not return her and Jesus to the past; Easter opens up a new future. The earthly ministry is over; now the ministry of the exalted, glorified, ever-abiding Christ begins.” (1) The resurrection is not a return to the past, but a movement to the future. Neither Mary (nor we!) can hold on to the past after resurrection. We look to the even greater future that God has in store for us through the power of the Holy Spirit. (2)

AND Jesus is not the only one changed by the resurrection:

You see, when Jesus was resurrected that morning so long ago, he took all of us with him – Mary, the disciples, the Jews and Gentiles of the time, and US. WE all are changed by the resurrection of Christ.

The resurrection of Jesus the Christ changed everything! It is a gift to us – his gift to us – an offer to throw away the fear that binds us and prevents from being the people God created us to be! If Jesus did “break the bounds of fear and death” then no longer do we need to fear the threat of death, the pain of slavery, the darkness of despair. We can hope! We can rejoice! Because, by his RISING, we are resurrected as well!

Death is powerful, but it does not have the last word. Neither on that day so long ago, nor today! The tomb is empty! He is not here! On this happy morning, there is a new life within us, planted by God; a new life that “cannot be killed, and if we can remember that… then there is nothing we cannot do: move mountains, banish fear, love our enemies, change the world.” (3)

For Christ is risen and We are risen, indeed! Alleluia! Amen.